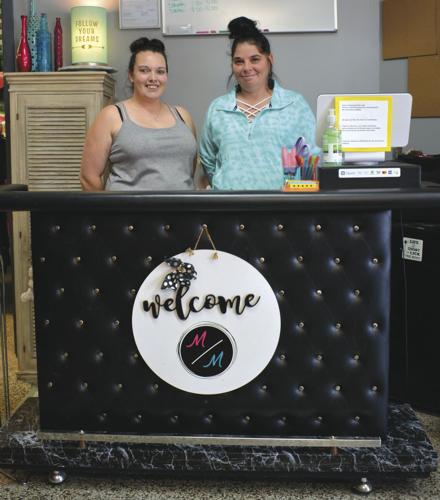 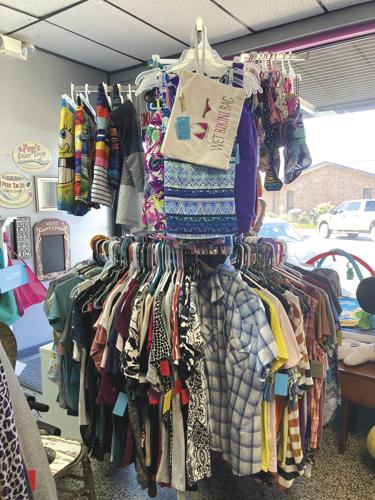 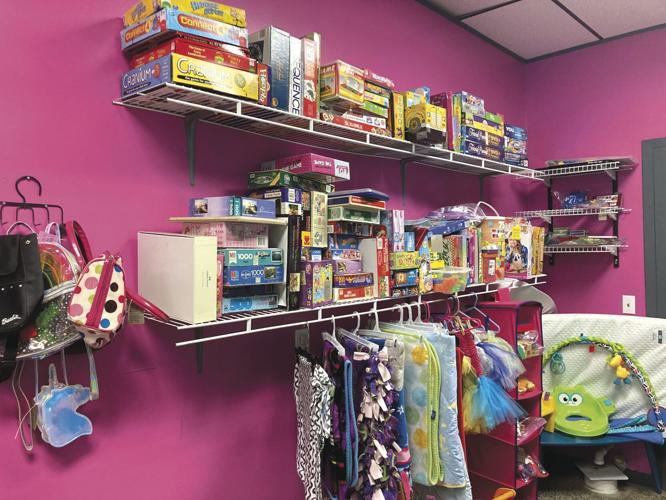 The store's kids section has many items including clothes, toys, games, books and baby items.

The store's kids section has many items including clothes, toys, games, books and baby items.

When longtime friends Melanie Landholm and Meagan Johnson decided they were going to make their dream thrift store a reality, a friend in the business encouraged them to make it happen.

“We just jumped into it,” Johnson said.

As they brainstormed, a vision for their business began to take shape and they started looking for a physical location in town.

A storefront in West Point caught their eye at 208 Main St., near the intersection of East Grove Street and Main Street.

Formerly a bakery, the store had been vacant for about two years, so the duo contacted the landlord about renting the space.

The store just needed some cleaning and minor fix-ups. Landholm and Johnson gave the walls fresh coats of colorful paint, and said their husbands also helped them with fixing up the place.

“Our poor husbands both work 50 plus hours a week and then would come here [to help]. So they're relieved that we're open and running now,” Johnson laughed.

They were able to move in at the end of June this year.

The M&M logo on the front of their store, which Johnson created, represents their initials and displays their favorite colors — pink and teal — which are also incorporated throughout the store.

Inside, the main room displays a wide array of women’s and men’s clothing as well as racks of shoes. The store also offers plus-size and maternity clothing.

An adjacent room is dedicated to items for kids and babies from clothes, toys, books, games and more.

The duo said offering baby items like high chairs, exercise bouncers and strollers is a huge plus for parents in the area, since those items aren’t found in stores locally.

“It’s the same with kitchen appliances,” Landholm said. “Like the skillets and crock pots, [stores here] don’t really carry any of those.”

A section is dedicated to kitchen appliances, dishes, serving items and across from it, a section for home decor as well.

Landhold and Johnson both said they also knew they wanted to offer something different in West Point by having a thrift store instead of a consignment store.

“We chose the way we did because there's two consignment stores here in town. And to me, thrifting is not competitive, but when you're in consignment it can be,” Landholm said.

Since they are a thrift store, the business owners said, their inventory comes from donations, which allows them to price their items lower.

For M&M’s Thriftporium, keeping the store full of inventory is not an issue.

The pair noted when they first announced plans this spring to open their own business, they received an influx of donations, so their houses and garages were full.

Johnson said a bulk of their items came from a seller in Beatrice, where Johnson is originally from. They received a large amount of inventory when the store owner switched from selling used items to only new.

They’ve also received items from leftover garage sales, posting on their M&M’s Thriftporium Facebook page, and by word of mouth.

Anyone who wants to donate items to M&M’s Thriftporium can drop items off during their business hours. The only items they don’t take are large furniture items.

“People have responded who say, ‘Hey, I'm cleaning out my basement and have items to donate,’” Johnson said. “And we do tell people we can come and pick up, they don't have to deliver.”

Even though their racks and shelves are full, they said they have plenty of items in storage to replenish the store a couple times.

The pair said they are often surprised at what comes in for donations. They receive jeans, shirts and other clothing items, brand new with tags still on them or other items still in packaging.

As for their hours of business, Landholm noted they wanted to have evening hours so people who work until 5 p.m. can still have an option for shopping. The store owners noted that “it does seem to pick up at that 6 o’clock hour.”

M&M’s Thriftporium is open from 1:30- 7:30 p.m. on Monday, Tuesday, Thursday and Friday during the week and is closed on Wednesdays.

Another draw to their business is that they offer weekend hours, when many stores on Main Street are closed. Currently the store is open 9 a.m. to 5 p.m. on Saturdays and Sundays, but the duo may adjust their Sunday hours depending on the level of business they experience.

In making their business happen, the friends and business owners said they “plan to be very involved in giving back to the community where we can.”

The items they don’t sell, “We donate back to the clothing boxes in West Point,” Landholm said.

“In November they’ll have the clothing drive that we plan to donate to,” Landholm added.

They also donate clothing items to the St. Joe’s closet.

The new business owners said they’ve already had a lot of positive feedback from customers after their grand opening on Aug. 17, from “Your items are really nice,” to “I’ll be back” and “I’ll bring my friends.”

Welcome to the discussion.

Keep it Clean. Please avoid obscene, vulgar, lewd, racist or sexually-oriented language.
PLEASE TURN OFF YOUR CAPS LOCK.
Don't Threaten. Threats of harming another person will not be tolerated.
Be Truthful. Don't knowingly lie about anyone or anything.
Be Nice. No racism, sexism or any sort of -ism that is degrading to another person.
Be Proactive. Use the 'Report' link on each comment to let us know of abusive posts.
Share with Us. We'd love to hear eyewitness accounts, the history behind an article.